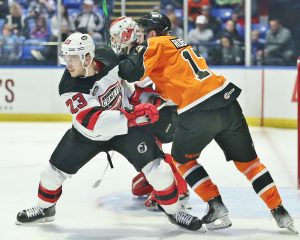 Weekly Recap
Wednesday, October 27: Wilkes-Barre/Scranton 4 – Phantoms 2
Gerry Mayhew and Adam Clendening scored in the first period to give the Phantoms a 2-1 lead but the host Penguins rallied from behind with a pair of power play goals to post a 4-2 win on Wednesday night in Wilkes-Barre.

Friday, October 29: Utica 5 – Phantoms 2
German Rubtsov had a goal and an assist to give the Phantoms a 2-0 lead late in the second period on the road at the Utica Comets. Hayden Hodgson also scored his first goal as a Phantom. The Comets scored late in the second period to gain momentum and then struck for four goals in the third including a pair from Alexander Holtz and an empty-netter at the end. It was Lehigh Valley’s first hotel stay “road trip” in 620 days after exclusively playing daytrip commutes for all of their away games going back to February, 2020.

Saturday, October 30: Syracuse 3 – Phantoms 2 (OT)
Morgan Frost scored his first goal of the season along with an assist and Gerry Mayhew scored his team-leading third of the year as the Phantoms again led 2-1 after 40 minutes. But the Crunch evened the score in the third while Lehigh Valley was unable to cash in during a key power-play opportunity late in regulation. Jimmy Huntington scored the overtime winner for Syracuse moments after Lehigh Valley’s Cam York had a bid that was deflected away.

Upcoming
Wednesday, Novemer 3, 7:05 – Wilkes-Barre/Scrant0n Penguins at Phantoms (PPL Center)
The Keystone State foes meet for Round 4 out of 12 in their rivalry series. The Phantoms and Penguins have gone to overtime in their last four PPL Center encounters with the two teams splitting those exciting contests in Center City Allentown. 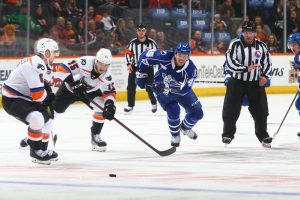 Saturday, November 6, 6:00 – Phantoms at Charlotte Checkers (Bojangles’ Coliseum)
The Phantoms head south to renew their rivalry with the Charlotte Checkers who are now the dual-affiliation of the Florida Panthers and Seattle Kraken. Welcome back to the Checkers who did not participate in the 2020-21 season! The game also marks the beginning of four straight on the road for the Phantoms.

Sunday, November 7, 1:00 – Phantoms at Charlotte Checkers (Bojangles’ Coliseum)
The Phantoms and Checkers have a Sunday afternoon rematch to wrap up the weekend set in Game 2 out of 8 in the season series. Phantoms’ alum Carsen Twarynski is now a Charlotte Checker after he was snagged by Seattle in the expansion draft.

Notes and Standouts
— The Phantoms will be opening a four-game road-trip that includes stops in Charlotte, Hershey and Providence over a seven-day stretch.
— Gerry Mayhew scored two goals last week and leads the team with three.
— Morgan Frost is getting it going with a goal and an assist on Saturday and is tied for the team lead with four points.
— Lehigh Valley is third in the Eastern Conference with 27.9 shots allowed per game.
— Cooper Zech was activated and loaned to Lehigh Valley and made his Phantoms’ debut on Saturday. The defenseman who joined the team from the Providence Bruins had taken an upper-body injury at Rookie Camp. 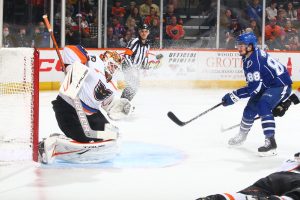 The Phantoms host the Wilkes-Barre/Scranton Penguins on Wednesday night and will be back at PPL Center on Saturday, November 13 on another Saturday Night Hockey Live at PPL Center featuring a live performance at the second intermission.
Tickets for all Phantoms home games are available HERE