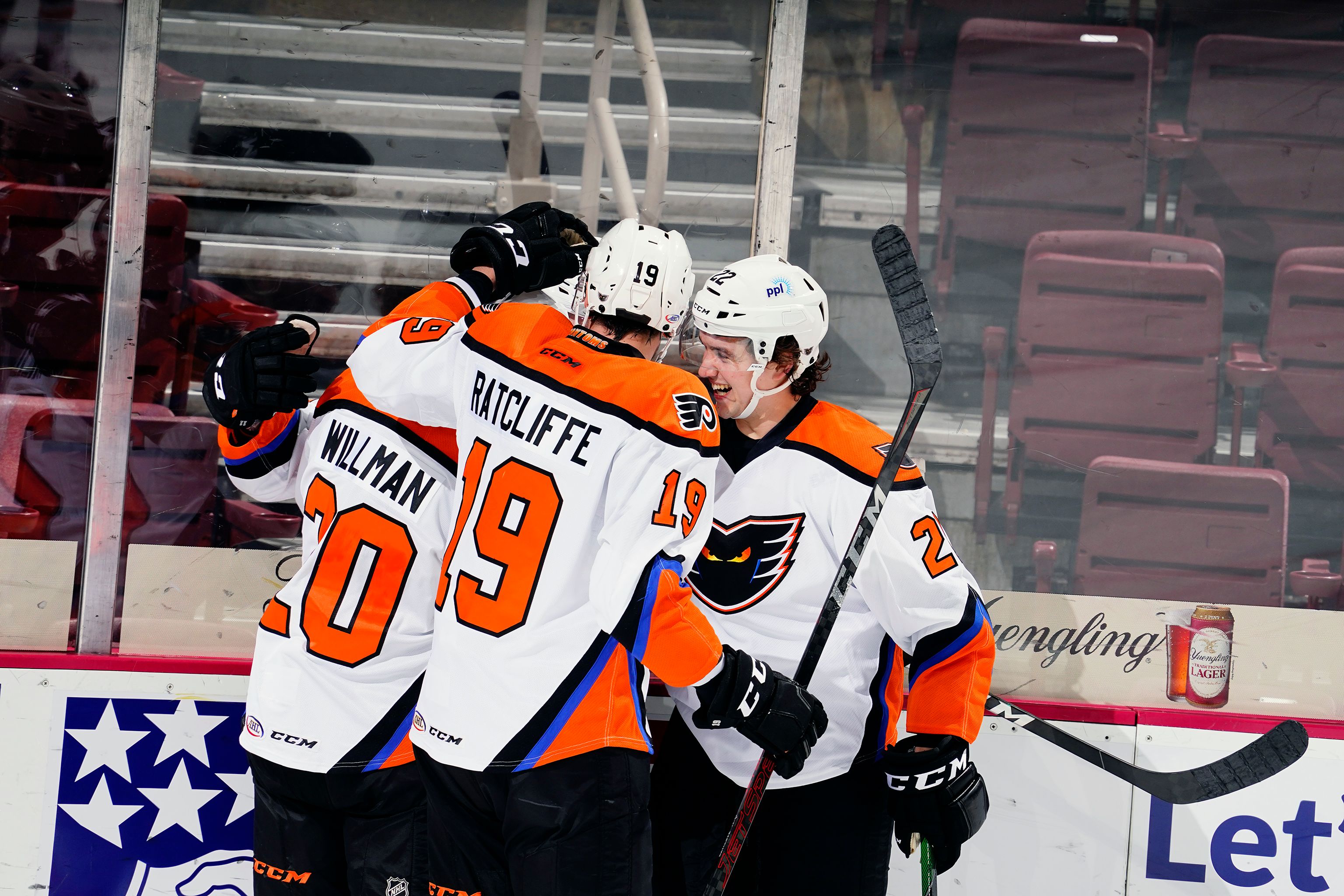 Wednesday, March 10, 2021
Lehigh Valley 1 – Binghamton 1 (Suspended)
The Phantoms and Devils were tied 1-1 in Newark, NJ when the game was suspended at the first intermission due to COVID protocols affecting the Devils. Cal O’Reilly had scored for Lehigh Valley and Zayde Wisdom recorded an assist for his team-leading tenth point this season. The game will be resumed at a later date with details to be announced in the future.

Saturday, March 13, 2021
Game Rescheduled
The Phantoms were to host the Binghamton Devils on Saturday night but the game was postponed due to COVID protocols affecting the Devils. The game will be played on Sunday, April 11 at 5:05 p.m. Tickets for the March 13 game are good for the make-up date on April 11. Contact the Phantoms ticket office with questions.

Sunday, March 14, 2021
Lehigh Valley 4 – Hershey 1
Wade Allison scored in his pro debut and Tyson Foerster scored his first pro goal to lead the Phantoms in a 4-1 win at Hershey on Sunday afternoon. With the victory, the Lehigh Valley Phantoms improved to 7-2-2 and took over the top spot in the North Division. They also improved to 4-1-0 against the Bears including a 3-1-0 record at Giant Center in Hershey. Ryan Fitzgerald and Derrick Pouliot both had a goal and assist each on the team’s two power-play goals. Zane McIntyre improved to 6-1-1 with a terrific 32-save performance. It was Hershey’s first home loss in regulation this season and ended the Bears’ four-game home win streak. 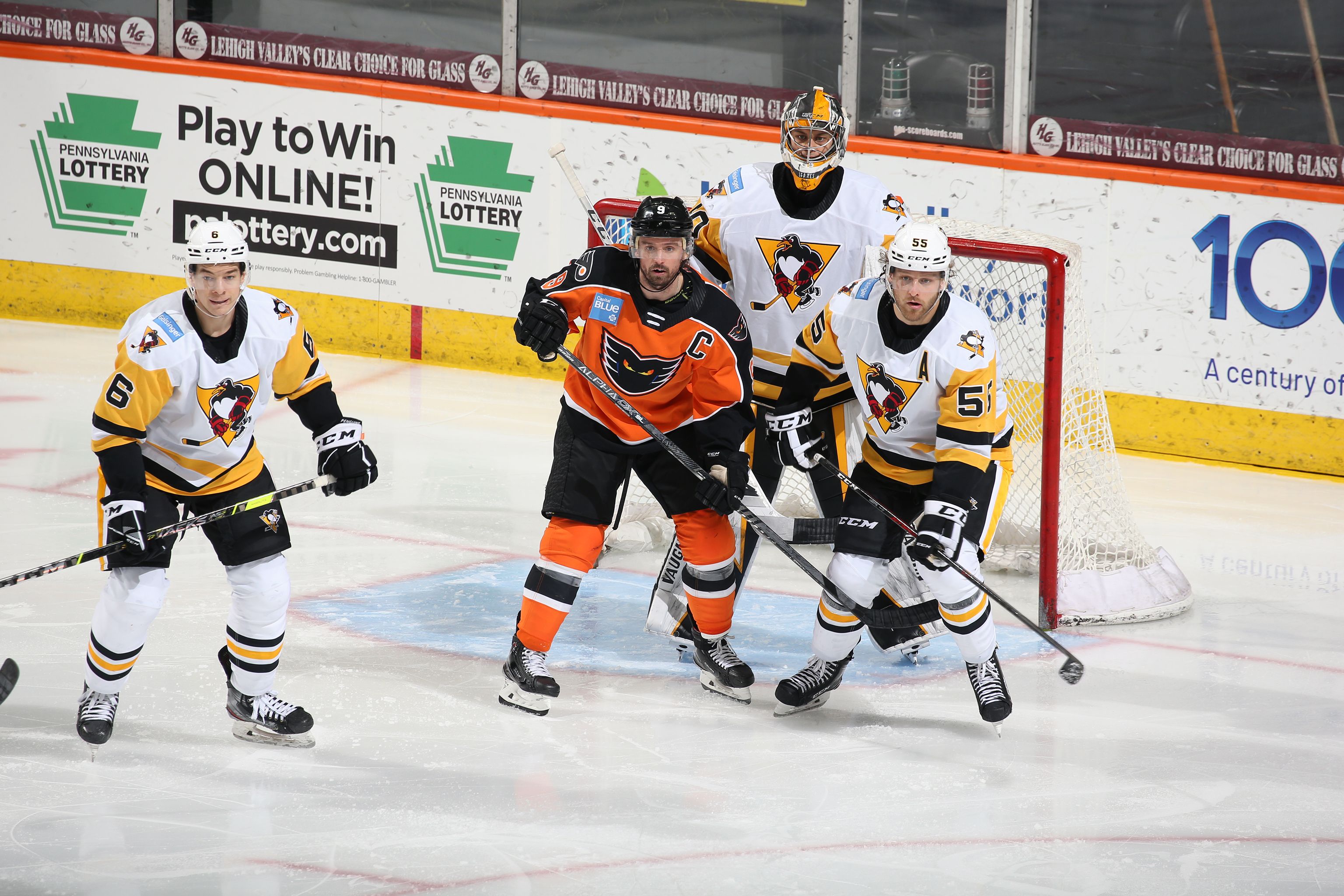 Wednesday, March 17, 2021, 7:05 p.m.  – PPL Center, Allentown PA
Lehigh Valley Phantoms (7-2-2) at Binghamton Devils (2-5-3)
Happy St. Patrick’s Day from PPL Center! The Lehigh Valley Phantoms host the Binghamton Devils on Wednesday night in the first of two home games this week. The Devils haven’t played since last Wednesday when their game against the Phantoms was suspended after one period. Binghamton had two scheduled games postponed on Friday and Saturday to be played at later dates. The Devils have not won in over a month. Since starting 2-0-0, Binghamton has dropped eight straight with an 0-5-3 mark. The Phantoms are 2-0-1 against Binghamton this year.
This is also the first home game for the Phantoms with 15% allowed fan capacity.

Friday, March 19, 2021, 7:05 p.m. – Mohegan Sun Arena, Wilkes-Barre, PA
Lehigh Valley Phantoms (7-2-2) at Wilkes-Barre/Scranton Penguins (5-3-3)
The Phantoms travel to Wilkes-Barre on Friday night for the first of a home-and-home series. Please note this is now a 7:05 start-time instead of the originally scheduled 5:05 beginning. The Phantoms are 1-1-1 against the Penguins this season including a 4-3 overtime win on Monday, March 8 in the team’s last visit to northeast Pennsylvania. Ryan Fitzgerald scored his second overtime goal of the season in that game. The Penguins were shut out at Syracuse 3-0 last Saturday ending their six-game point streak.

Sunday, March 21, 2021, 3:05 p.m. – PPL Center, Allentown, PA
Lehigh Valley Phantoms (7-2-2) vs. Wilkes-Barre/Scranton Penguins (5-3-3)
The Phantoms rematch with the Penguins at PPL Center in the team’s first Sunday home game of the season. The Phantoms are already 2-0-0 in Sunday games this season with a pair of wins at Hershey. Max Willman has scored three of his six goals against the Penguins and Zayde Wisdom has two goals and one assist for three points against Wilkes-Barre/Scranton. Rookie speedster Felix Robert has scored both of his goals against Lehigh Valley. Big Czech forward Radim Zohorna leads the offense with nine points including three goals and six assists. The Penguins posted an overtime win at PPL Center on February 27 on a winner for Frederick Gaudreau who has since been called up to Pittsburgh. 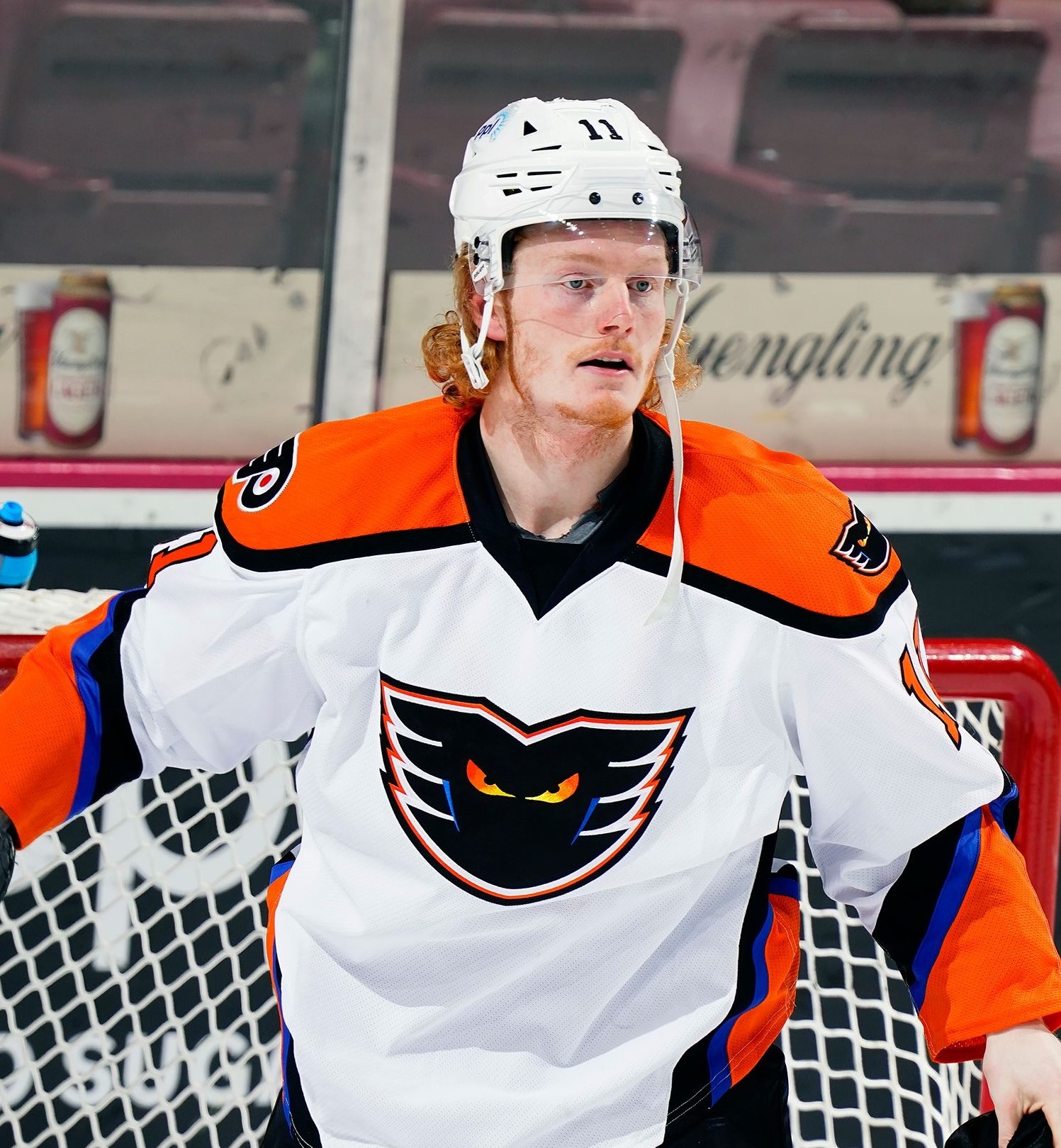 Pro Debut! Goal Debut!
Wade Allison scored a goal in his first pro game on Sunday, March 14 at Hershey in his first game in over a calendar year. The Flyers’ second-round choice in 2016 had not played since the cancellation of his senior season at Western Michigan last March. And his pro career was delayed even longer when he underwent ankle surgery in January at the beginning of Flyers’ training camp in Voorhees. 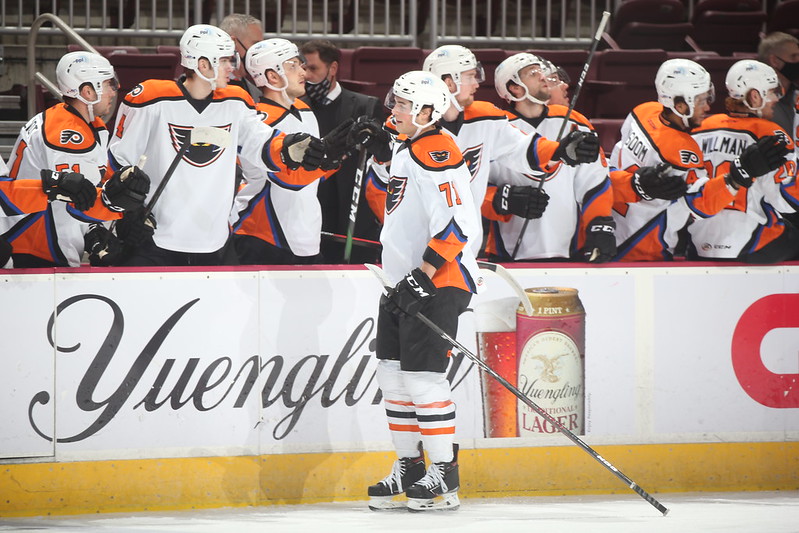 Foerster’s First
Tyson Foerster also scored his first career goal in the Sunday game at Hershey. His tally came early in the first period on a 2-on-1 rush with David Kase after a nice poke forward by Garrett Wilson sprung them up ice. The Flyers’ first-round selection in 2020 had missed almost a month from February 6 until March 3 with a fractured shin due to a collision in the team’s opening game of the season. 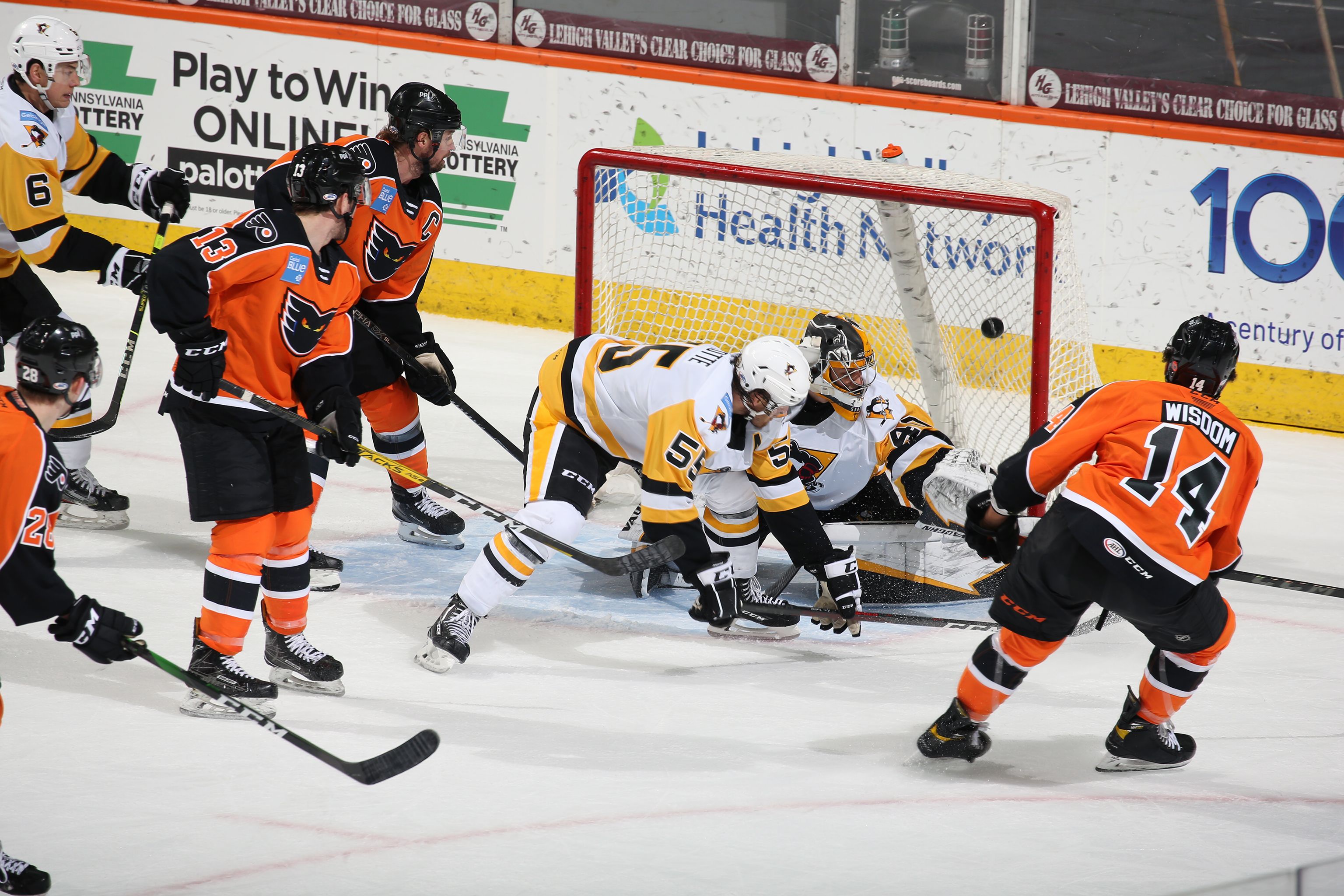 Power Surge!
The Phantoms have gone 6-for-23 (26.1%) on the power play in their last six games after initially starting off in a 1-for-25 stretch. Ryan Fitzgerald has taken part in five of the team’s seven power-play goals this season scoring 2-3-5 on the man-advantage. Cal O’Reilly is 1-3-4 on the power play and Zayde Wisdom has scored two power-play goals and has one assist.