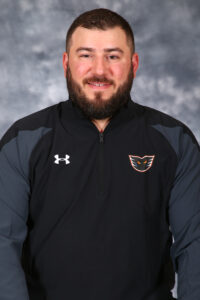 Zac Guercia is entering his fourth season at Head Equipment Manager for the Phantoms.

Before coming to Lehigh Valley, Guercia spent 11 seasons with Manchester Monarchs. Guercia started as a locker room attendant  before being named the Assistant Equipment Manager position for Manchester in 2008, who were then playing in the AHL. The Monarchs would win the 2014-15 Calder Cup in their final season in AHL. Following that season Guercia was named Head Equipment Manager for the Monarchs for 2015-16, the teams first year in the ECHL and spent four seasons with the Monarchs before joining Lehigh Valley in 2019.

Guercia resides in Macungie with his wife Kristina and daughter Mia, Guercia is a native of Concord, New Hampshire.